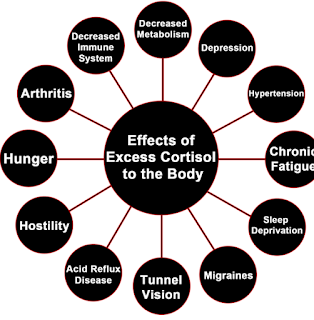 Stress, the uncomfortable feeling of being overwhelmed, worried or run-down, can lead to both physiological and psychological disturbance. Whereas good stress (Eutsress) may push one to achieve their goals, meet targets and lead better fulfilling lives from the successes achieved as a result, it is bad stress (distress, acute stress) than is can cause problems if not well managed. Baum (1990), describes stress as any "emotional experience accompanied by predictable biochemical, physiological and behavioral changes." It is the invisible/unobservable biochemical changes during a stressful episode that can wreak havoc. This article tries to elucidate one such biochemical, cortisol, the so called ‘stress hormone’ ...which I call the ‘enemy within’ or the 'silent killer'

We all encounter one or more of stressful situations such as a relationship break-ups, having to take care of a family during hard economic times, joblessness, death of a loved one, termination of employment, and such daily hassles that keep one under constant assault. When the body comes under such pressure, present or perceived, a mechanism to deal with the threat through an adaptation process called flight or fight is initiated. Flight or fight was coined my Walter Canon in the 1920s. That ‘animals react to threats with a general discharge of the sympathetic nervous system.’ It was later publicised as the initial stage of an adaptation mechanism in response to stressful situation among vertebrates and other organisms. Through complex sympathetic nervous system processes, the hypothalamus at the base of the brain sends a signal that initiates a biochemical process leading to the release of adrenaline and cortisol by the adrenal glands, among other hormones.

Adrenaline increases the individual’s heart rate, elevates blood pressure, and boosts energy supplies to equip the individual with the requisite abilities and strength to deal with the stressing situation. Cortisol, the primary ‘stress hormone’ increases sugar levels in the blood stream, enhances brains use of glucose, and avails substances necessary for repair of tissue. This hormone gets in the way of any functions that are not adding value to the flight or fight mechanism under way. For example, it alters the digestive and reproductive system, and growth processes. Signals are also send to brain areas responsible mood, motivation, and fear.

Under normal circumstances, where the ‘action’ as anticipated by the body takes place, and the perceived or present stressful circumstance is dealt with, and/or passes, adrenaline and cortisol levels go back to normal. HOWEVER, in instances where the stressor is continually present and not effectively dealt with, the flight or fight mode remains engaged. This may mark the beginning of problems.

Cortisol levels begin to build up in the blood, which is not good for the body and mind. The long stay of these hormones, and especially cortisol can alter the functioning of many body processes, The end result could be conditions such as anxiety, depression, heart problems, digestive issues, weight gain, headaches, sleep problems, memory and concentration impairment, learning difficulties, lowered immunity, and ...the list is endless

It is therefore important to know how to deal with stress
Posted by Steve Muthusi at 07:06:00